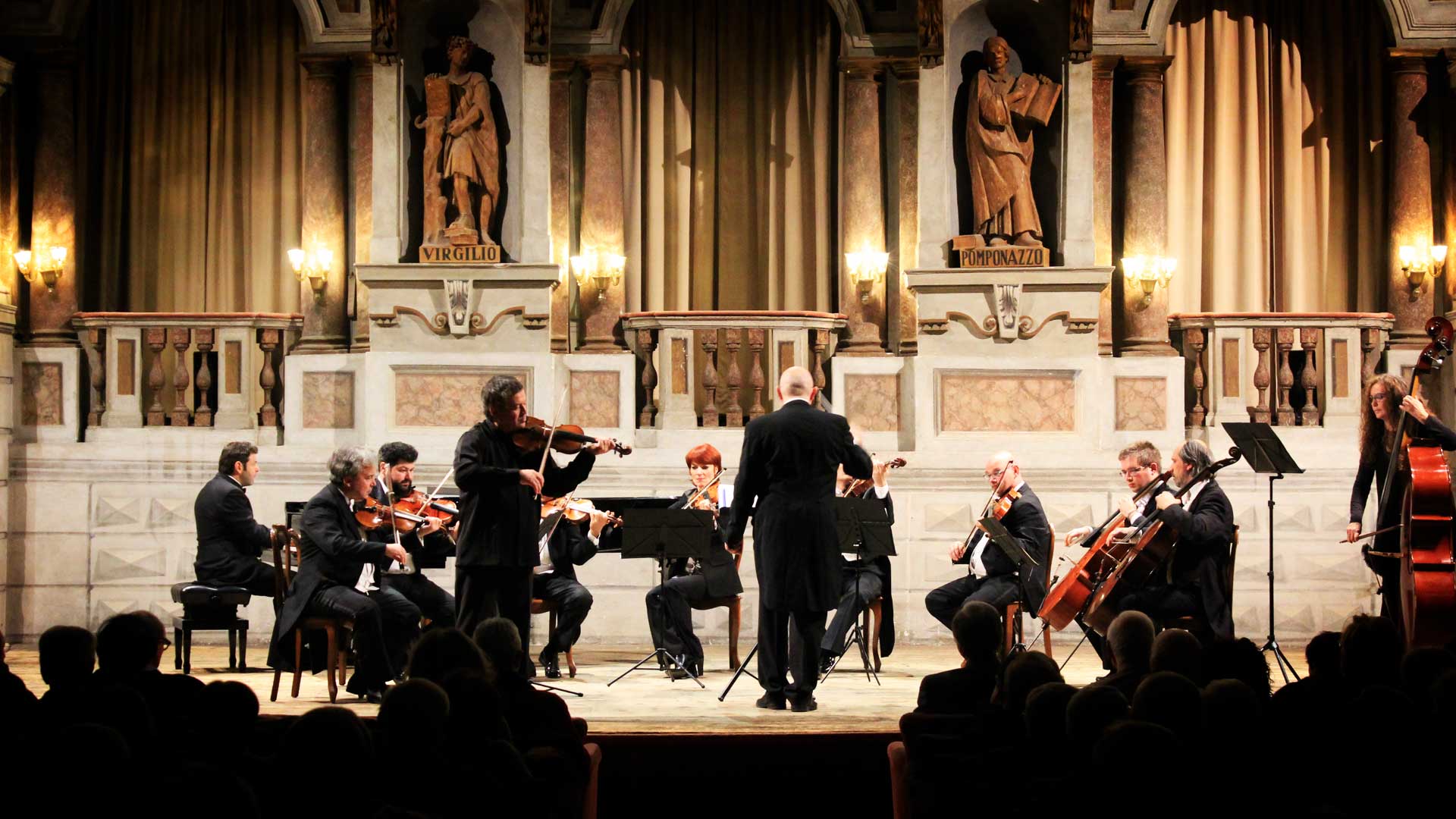 On concert dates, the Associazione “Amici dell’Abbazia di Rivalta” will be offering a free guided tour of the abbey, starting at 3.30 p.m.

The Asolo Chamber Orchestra is the result of an artistic agreement among the best musical talents of the Venetian territory and acclaimed soloists that in these years have collaboreted with the International Festival of Classical Music “Malipieroconcerti” directed by M ° Valter Favero.
This musical partnership was founded in 2005 and since then the ACO has made numerous concerts arousing interest and great success with public and critics.
The ACO tackles the repertoire with considerable flexibility from the 1700s to the 1900s, distinguishing for its ductility as noted by all the performers and conductors who collaborated with it and music critics. Protagonist in the world of classical music, the Orchestra has approached also the Jazz repertoire, the Neapolitan songs and the Argentine Tangos.
In the course of his activity has been a guest of prestigious musical Istitutions collaborating with internationally renowned artists. Moreover, within the ACO, various chamber ensembles are active like Trio Asolano, Quartet Milonga del Angel, Akedon Quintet, the Ensemble of the ACO.
The Orchestra has made numerous recordings and participations for the italian RAI and Mediaset broadcasts.

Valter Favero, Conductor
He graduated with honors in piano at the Castelfranco Veneto Conservatorium of music A. Steffani, under the guidance of Maestro Massimo Somenzi. A pupil of cellist Mario Brunello for chamber music, he attended the Master Classes conducted by pianists Lev Vlasenko, Michail Voskresensky and Anatolj Vedernikov, lecturers at the Moscow Conservatory of Music. He studied with Maestro Pier Narciso Masi for the piano and also attended the chamber music course set up by the Piano Academy of Imola and held by pianists Dario De Rosa, Alexander Lonquich and Mauren Jones. The meeting with the great pianist Aldo Ciccolini was decisive for his artistic training.
He performs concert activities both as a soloist and in chamber ensembles, invited by prestigious Musicala Istitutions in Italy, Spain, Germany, Switzerland, Bulgaria, Latvia, Canada, Australia, Czech Republic, Slovenia. He has performed in prestigious concert halls such as Town Hall in Sydney, “Chapelle Historique du Bon-Pasteur” in Montreal, Centrepoint in Ottawa, House of Culture in Sofia, Hardotèneti Muzeum in Budapest, Wagner Zale in Riga, Monestier De Sant Pere in Camprodon in Spain for the XXII Festival Isaac Albèniz, Biblioteca de Catalunya in Barcelona, ​​Teatro Laz Rosas de Madrid, Französische Kirche in Potsdam, Rocca Sforzesca in Imola, Ateneo Veneto in Venice, Teatro degli Industri in Grosseto, Palazzo Siotto in Cagliari, Teatro Alighieri in Ravenna, Sala dei Giganti in Palazzo Liviano of Padua, Kursaal Theater of Bari, Bibiena Theater of Mantova. He has conducted and played with numerous orchestras and is currently conductor of the Asolo Chamber Orchestra that he founded in the 2005.
He is regularly invited in juries of National and International Piano Competitions. He is a piano professor at the Castelfranco Veneto Conservatorium of Music “A. Steffani”.

Erminio Ferrari, violin
(Italy)
“He is one of the most charismatic and fascinating violinist on today’s International scene. He is an artist who puts together an absolutely natural technique and astounding ability” (L. Bamboschek, il Piccolo di Trieste ). “He gave a breathtalking account of Paganini’s maniacal furry in Variations based on themes from a Rossini Opera” (Cecilia Porter, Washington Post). “An acrobatic virtuoso and an exuberant personality” (La Voce del Popolo).
At the age of 12 he started studying violin earning a diploma with highest marks at the L. Boccherini Conservatory in Florence under the guidance of Maestro R. Zanettovich. He then continued his studies in Chamber Music with R. Zanettovich, P. Farulli, D. De Rosa at the School of Music of Fiesole.
He has collaborated as Concertmaster and soloist with the Italian Youth Orchestra, the Teatro Comunale Orchestra of Bologna, the Teatro Verdi Orchestra of Trieste, the Radio Symphony of Lubiana, the OSCA of Asuncion in Paraguay, and many other Orchestra under conductors such as: Bertini, Maezel, Muti, Maag, Nanut, Sinopoli, Thielmann, ect. He collaborated with great musician such as K. Bogino, P. Demenga, W. Mendelsshon, Y. Bashmet, ect. These are characteristics which have distinguished this artist in the most important concerts hall around the world including Lincoln Center in New York, Suntory Hall in Tokyo, Musikverein in Wien, Schauspilhaus and Philharmonie in Berlin, La Scala of Milan, Operà de Paris, etc. Ferrari has recorded for Erato, RCA, RCA Victor, EMI Nippon, Rivoalto, Rainbow Classic and Real Sound.

Fatlinda Thaci, violin
(Albania)
Born in Tirana (Albania), she soon began studying the violin under the guidance of Maestro Papavrami and, later, with Maestro Fundo. In 1991 she won the scholarship of the Milan Conservatory and she studied under the guidance of M° Oliveti.
In 1993 she won the 1st Prize at the International Competition of Tortona with the pianist Grid Rroji in the soloist category. In 1994 she attended the course of Maestro Accardo at the Walter Stauffer Academy of Cremona. In 1996 she followed the chamber music course at the Chigiana Academy under the guidance of Maestro Brengola. In 1995 she graduated brilliantly at the Giuseppe Verdi Conservatory in Milan. In 2000 she won the 1st Prize of the Grosseto Chamber Music Competition with the pianist Elda Laro.
In 1994 he carried out an intense quartet activity obtaining excellent results in international competitions and recitals. The following year she performed in chamber ensembles and as a soloist, performing in various European countries such as Austria, France, Switzerland, Spain and Italy. Between 1996 and 1999 she was Concertmaster of the “G. Verdi” Symphonic Orchestra in Milan and collaborated with conductors such as Muti, Pretre, Sado, Yurowsky, Chailly, Giulini. In 1999, by choice of the M ° C. M. Giulini and Maestro R. Chailly, the magazine “AMADEUS” attributes an important recognition to her for her musical qualities and for the seriousness of her work. The stable director Alun Francis said of her: “His sentences and his musicality are superb and the intonation perfect”. Since 2008 she is the Concertmaster of the “Pomeriggi Musicali” Orchestra in Milan conducted by M° Antonello Manacorda.

Silvestro Favero, viola
(Italy)
He earned his diploma in viola at the Conservatory “C. Pollini ”of Padua under the guidance of the Maestro Dino Asciolla with whom he studied since 1990 till ‘93. In ‘94 and ‘95 he studied at the W. Stauffer Academy of Cremona under the guidance of Maestro Bruno Giuranna and participated to masterclasses held by Maestro Fedor Drhzinin and Wolfram Christ. In 1997 he improved further by obtaining the Master Degree at the Sydney Conservatorium of Music in 1997 under the guidance of Maestro Wolfram Christ, Prof. Ester van Strallen and Susan Blake. He also completed his studies with M. Piero Farulli, Milan Skampa, Dario de Rosa and Alexander Lonquic and Pier Narciso Masi.

He won the 1st prize in the “Città di Genova” National Bow Competition in 1990 and won the first prize – Viola category, in the editions of the Città di Vittorio Competition in 1988 and 1994.
In 1998 he was chosen by M° Claudio Abbado to play the role of First Viola of the Gustav Mahler Jungendorchester. He has collaborated with artists such as L. Spierer, M. Brunello, K. Bogino, D. Bogdanovic, Piero Toso, E.van Strallen, G. Carmignola, Pavel Vernikov, Dejan Bogdanovich. As a Principal Viola he has collaborated with the following national and international orchestras: Orchestra of the Gran Teatro La Fenice Foundation, Orchestra of the Arena di Verona Foundation, Gustav Mahler Jungendorchester, Verdi Orchestra of Milan, Orquestre Sinfonica della Galicia, Orchestra del Teatro Comunale di Bologna Foundation. He is the viola professor at the “J. Tomadini” Conservatory in Udine.

Francesco Ferrarini, cello
(Italy)
He was born in Verona, completed his studies at the Conservatory of Rovigo in the class of Maestro Simoncini where he graduated with 10 e Lode. He specialized with Maestro Franco Rossi, of which Ferrarini is considered one of the best students.
From a young age he was the winner of competitions such as: Perosi di Biella, Zamboni di Cesena, Nuovi Talenti Cittadella (Pd), International Chamber Music Competition of Caltanissetta, Quadrivio Prize of Rovigo and others.
As the first cello and soloist, he has collaborated with important groups including, I Virtuosi Italiani, I Solisti Veneti, I Solisti Filarmonici Italiani, Filarmonica della Fenice, The Soloists of Teatro Regio di Parma, Nextime Ensemble, The Filarmonici di Verona, L’Arte dell’Arco, Parma Opera Ensemble Italian Performers … performing more than two thousand concerts in Italy and abroad. From 2000 to 2008 he was First Cello in the Orchestra of the Teatro Regio of Parma, collaborating over the years always in the role of Principal Cello with the Orchestra of the Teatro Carlo Felice of Genoa, the Orchestra of the Teatro Regio of Turin, the Theater of San Carlo Napoli and the Teatro Comunale of Bologna, the Rossini Philharmonic Orchestra of Pesaro, also from 2011 to 2015 he has been the Principal cello with Orchestra of the Teatro La Fenice in Venice. He carries out an intense activity of chamber music playing with musicians such as: Jorg Demus, Boris Belkin, Mario Brunello, Pietro De Maria, Francesca Dego, Bruno Canino, Pavel Vernikov, Danilo Rossi. He played under the guidance of conductors such as: M.W.Chung, Y. Temirkanov, R. Muti, R.F. de Burgos D. Kitajenko. There are numerous recordings for BMG – Memories, EMI; Tactus, Chandos, La Bottega Discantica Dynamic, New Era and recordings for RAI and radio of Italian Switzerland. He is a cello teacher at the “Bomporti” State Conservatory of Music in Trento. He plays on a 1700 cello of the Italian school. 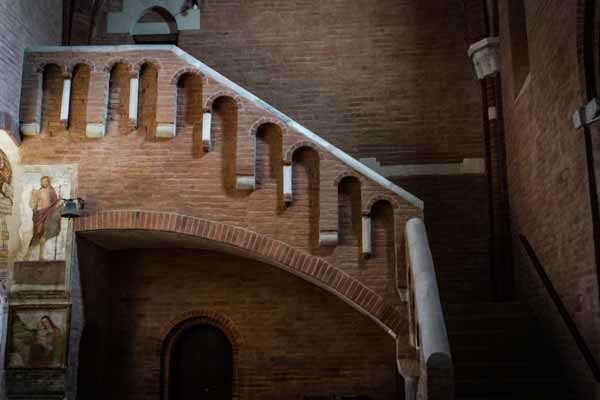